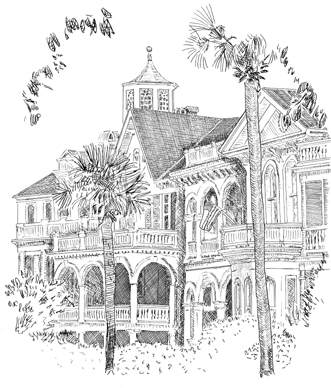 Charleston, South Carolina has been transformed over the past thirty years from a dowdy maiden aunt of a city dying in its old lace and dreams of better times past to an increasingly vibrant dame torn between saving its opulent past and its modern future.  One of the nation's richest colonial cities, it was also one of the most ethnically diverse with not only the requisite number of English Settlers, but thousands of French Huguenots (many of whom were actually Iberian Jewish refugees hiding among this tolerant group), Germans, Irish, and one of the largest free African-heritage populations in the American South.  The result was a rich cultural stew which created one of the most vibrant cultural mixes along the colonial eastern seaboard.  (left-- South Battery pen and ink)